Gourmet Hiking from France to Italy: A Most Pleasurable Experience

What do you get when you mix gourmet food and wine with extraordinary hiking in the French and Italian Alps? You get Hedonistic Hiking, a sort of concierge service specializing in gourmet walking holidays. I spent nine days of absolute pleasure walking high in the mountains of France and Italy, experiencing new food and charming inns, and hearing stories about the area with the top-notch expedition company.

Pleasure seekers introduced to something new

The all-inclusive adventure began in Nice, France, where I took a seat in one of two modern vans that transported our group of 16 pleasure seekers to trailheads in some of the most remote areas of Mercantour National Park. The park is the first national park operated by two different countries, France and Italy, which are, of course, coveted culinary destinations. Hedonistic Hiking opened doors to off-the-beaten-path tramps and eateries that I would not have found on my own. (And popped open bottles of French and Italian wines that were new to me.)

Curated trails took us above the treeline to hidden glacier-blue mountain lakes or to mountaintop views that extended over the Maritime Alps to Cannes and the Mediterranean Sea.

Our first hike led us to a mountain refuge maintained by the Club Alpine Français there fit young men cooked and served our hot lunch of vegetable soup, steamy lasagna, blueberry tart and wine. We entered the cozy refugio under partly cloudy skies, but in the midst of our meal, hail began pummeling the metal roof. The white stuff covered the trail and mountainsides changing the environment from summer to winter in one healthy weather event. Fortified by the ample lunch, we walked into the metamorphosed mountain terrain with a feeling of awe and wonder rather than fear and trepidation.

On other hikes, we experienced the sanctuary of lush beech forests. Entranced by specs of light that danced magically on the trail ahead, created by the autumn leaves blowing overhead, I would stop in my tracks charmed.

We found ourselves at a series of mystical waterfalls on our last trekking expedition, which was in the Piedmont area of Italy. When I was just beginning to think that maybe I was hungry, a spectacular lunch appeared trailside. Throughout the gourmet hiking holiday, I was grateful that I didn’t have to carry the abundant spread of food and local wine that seemed to materialize magically in the remote high elevations.

Truth be told, while we rested the evening before, Joli, one of our two personal guides, scoured local markets for the best in-season produce and purchased charcuterie and wines appropriate to the region. Salads, soups, sausages and platters of delicately arranged fruit were laid out for us. With appetites whetted by miles of walking in the fresh alpine air, we launched into the food as if we hadn’t eaten for days. But so not true. In the evenings we met for dinners at restaurants vetted by our hosts, Jackie Parsons and her husband, Mick. Jackie has created relationships with these restaurateurs who take special pride in their family businesses. One family moved their eatery to the Piedmont after earthquakes last summer destroyed their restaurant near Rome. “We may stumble, but we will not fall,” said Joli quoting an Old Italian adage that the restaurateurs have adopted as their own.

At the end of the day, we laughed and shared the adventures du jour over gourmet dinners of three or four courses. I am still dreaming about the meal at St Martin de Vésubie: foie gras with a fig compote as a starter, a main course of duck roasted in its own fat with mushrooms and a dessert of berries from the woods. As usual, each course was accompanied by the appropriate local wine. Our final meal together included six courses. “Here in the Piedmont, it’s traditional to have three starters,” whispered Jackie who was sitting next to me at our table of eighteen. And so we did.

“I like to offer dishes that you might not try at home,” said Jackie over the Truite au bleue, a traditional alpine delicacy. That’s good for me because although I speak a little French, I cannot understand every item on a menu and gravitate to those I know. This foodie adventure, which included a cooking class in Cuneo, Italy, got me loving new dishes of southern France and northwestern Italy.

Walking in the footsteps of Centurions

The trails of the Southern Alps were built on history. In Roman times this was a trade route and Centurions marched their armies over these roads. During medieval times, mule trains sometimes made of hundreds of animals carried salt over these mountain passes. Over time the border conflicts arising in this mountainous country between France and Italy caused walls to be built around medieval towns, fortifications to be strung along mountain passes and monuments erected to heroes. In more recent times, sympathizers helped smuggle Jews out of French cities and into these mountains during World War II. Jackie was quick to point out evidence of all of this history as we hiked along. One tradition of Hedonistic Hiking tours is an after-lunch book reading, and it gave us time to digest our sumptuous meals while feeding our souls with stories of the human endeavor. On this trip, we listened to A Thread of Grace, a novel based on the true story of Jews from this area escaping Nazi genocide by hiking over these same mountain trails.

They keep coming back for more … more stories, wine and food

Story telling is one of Jackie’s approaches to guiding, and she makes you feel as if you were one of her close friends simply out for a tromp in the woods. She shares information conversationally and is perceptive to observe what interests her guests. She’s knowledgeable in local food and wine as well as the local history and insider tips. Many of my fellow hikers have actually known Jackie for a long time; some are returning for their fifth or sixth Hedonistic Hiking expedition. “As good as I am, I could never organize a trip like this myself,” revealed one of the repeat guests. “We trust Jackie and Hedonistic Hiking to provide a most pleasurable experience.”

Stacey Wittig is a travel writer based in Flagstaff, Arizona. “If this tour looks too aggressive for you, check out Hedonistic Hiking’s tours to Tuscany or other places. Their hikes are rated for difficulty, so its easy to match a walking holiday with your level of ability,” advises the wandering writer who was hosted by Hedonistic Hiking for this excursion. 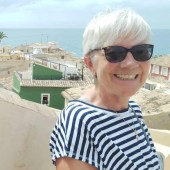 Five Summer Vacation Destinations if You’re Not a Sun-Worshipper

Why the Brits love the Grand National

Indulge like the Gods in Crete by Inka Piegsa-Quischotte