The Tandem Tasters were fortunate to spend a week at Rancho La Puerta with Andy Schloss, when we were all presenters. Andy was the “Celebrity Chef.”  Naturally, we attended his cooking demonstrations. He has authored 15 published cookbooks and appeared on many national television shows. Andy focused on grilled food and the recipe we are sharing is one he and his wife serve at their own Thanksgiving dinner for those who are vegetarians. It is also a terrific side dish. The recipe calls for pumpkin, but at the ranch, we substituted acorn squash from the garden. It was delicious.

1 1/2 pounds crimini mushrooms, halved or quartered, depending on size

1 (flat rather than round) pumpkin (at least 12 pounds), with a stem

Soak the dried porcini mushrooms in boiling water in a bowl until softened, about 10 minutes. Drain (retaining soaking liquid) and chop coarsely.

Heat the olive oil in a large skillet over medium high heat. Add the onion and sauté until tender, about 3 minutes. Add the crimini mushrooms and the rosemary leaves, and sauté until they lose their raw look. Remove from the heat and stir in the roasted garlic, truffle oil, reserved soaked mushrooms, salt, and pepper. Set aside.

Combine the reserved mushroom soaking liquid with enough water to measure 3 cups. Bring to a boil in a large saucepan, add a big pinch of sea salt and rice. Boil until the rice is tender, about 10 minutes. Drain, and mix the rice with the mascarpone, cream, Parmagiano cheese, and nutmeg. Correct the seasoning with salt and pepper. Set aside.

Light a grill for direct medium heat, about 350F.

Remove the stem end from the pumpkin. Clean the interior cavity of seeds and pulp in the same way you would if you were preparing to carve it as a jack-o-lantern. Using a big spoon, scrape the flesh from the inside of the top half of the pumpkin, reducing its thickness by about half. Allow the scraped flesh to collect on the bottom, which will help the whole pumpkin roast more evenly. Cut a slice from the interior of the pumpkin’s lid, reducing its thickness by half and place in the pumpkin on the bottom.

Put the whole thing on the grill away from the heat, cover, and cook until the pumpkin is tender to the touch, about 1 1/2 hours. If your grill has a temperature gauge, it should stay around 350F. If using charcoal or wood, you may have to replenish coals after the first hour.

Remove the pumpkin and set on a large platter.  Let rest for 10 minutes. Remove the foil from the top and sides of the pumpkin, tearing it around the base. The pumpkin is still resting on foil, but excess foil doesn’t show. Remove the lid and serve portions of the rice and mushrooms, along with pumpkin flesh scraped from the interior walls.

Tip: When stuffing the risotto into the pumpkin or squash, if there is extra, place in a casserole dish to heat. 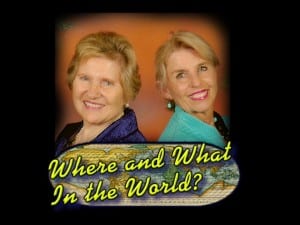 Finalist in the Writing and Publishing category of the 2009 Next Generation Indie Book Awards, “$uccess, Your Path to a Successful Book”

Maralyn Dennis Hill, The Epicurean Explorer, is president emeritus of International Food Wine & Travel Writers Association, member of Society of American Travel Writers, and Society of Professional Journalists. She is Executive Editor of Luxe Beat Magazine and contributes to other publications. She also speaks and is a guest on many shows. The majority of Maralyn’s articles are now geared to the luxury market, spas, corporate retreats, business events, and culinary tourism, from simple to gourmet. Maralyn’s description of herself: I was born to travel and tell the tale. I’m energized by different cultures in every aspect of their lives, from food, wine, and destination, to how they conduct business. Travel represents a continual geography lesson.